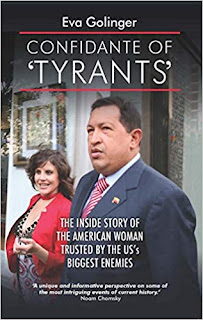 Book Review: Eva Golinger, Confidante of ‘Tyrants’: The Inside Story of the American Woman Trusted by the US’s Biggest Enemies. Oxford: New Internationalist, 2018.


Don’t let the title put you off. Eva Golinger is a very smart, hard-working, and courageous woman. She pioneered investigation into the intense efforts of the United States government to overthrow the democratically-elected government of Venezuela. I certainly agree with Noam Chomsky that this book is “a unique and informative perspective on some of the most intriguing events of current history.”

Golinger points out the extreme hypocrisy of the U.S. government: it brazenly attempts to win so-called “regime change” in other countries by funding opposition political parties, protest movements, and journalists, while at the same time strictly prohibiting any other country or noncitizen from contributing to a candidate or party in any U.S. election. What a double standard!

In this memoir, Golinger is brutally honest. She served as a foreign policy consultant to the Hugo Chávez government from 2004 to 2012 without salary, and accompanied him as he met many other heads of state. Even as the president trusted her, other Chavistas tried to block or sabotage her efforts. Now is openly critical of his mistakes. The corruption that he tolerated among some of his supporters grew to epic proportions.

Disclaimer: I lived and worked in Venezuela from 2006 to 2016 and had the honor to meet Eva Golinger on several occasions. I share her opinion that President Chávez had a great love for the Venezuelan people and used petroleum revenue to achieve great advances in social welfare: education, health care, food, housing, culture. I agree with her that the messy process of empowering communities in participatory budgeting was very significant. She says Chávez “gave his life for his country and his fellow citizens.” I also share her opinion that the mistakes he made, especially the economic ones, have now come back to ruin the Bolivarian Revolution, resulting in pain and tragedy for the people.

Golinger says that Chávez “had no hate in his heart that I ever saw.” I would disagree, because he regularly insulted the opposition, always calling them “squalids.” (The word is an adjective, not a noun, in Spanish as well as in English, yet it is obviously an insult). If you insult those who disagree with you, you’ll never win them over to your side. He also imprisoned opponents accused of corruption, while most of his supporters who were corrupt were immune from punishment. She points out that “Chávez’s habit of choosing loyalty over competence was a fatal mistake.”

She admits her mistakes, including her distribution in November 2007 of a purported CIA memo that was a sloppy forgery created by the Venezuelan political police (SEBIN)—she was “spammed” she says. After Chávez died, she continued to support his chosen successor, President Nicolas Maduro, for two years until: “I saw up close and personal what I considered to be severe corruption and criminal activity inside his government. And when I informed him of those activities, instead of initiating investigations against the people involved, he rewarded them.”

I recommend the book to anyone who wants to see the dramatic changes in Venezuela “up close and personal.”

Posted by Dada Maheshvarananda at 00:11 2 comments: