What others are saying about "After Capitalism: Economic Democracy in Action"

"After Capitalism is a crucial contribution towards figuring out where we want to go, not only after capitalism, but now, as we try to build the new world within the old. It is so important not only because of the thoroughly considered vision it presents, but also because it incorporates a spiritual dimension that is missing from most post-capitalist visioning." - Gregory Wilpert, author of Changing Venezuela by Taking Power

"The world is in urgent need of new ideas on how to house, feed and shelter us all, without destroying the planet we are on. After Capitalism is a rich and varied warehouse of new ideas and new thinking that will do much to contribute to a better humanity and a better world." - Kevin Cahill, author of Who Owns the World

“I enthusiastically recommend this book for a college classroom and for those who are organizing for economic and social justice.” - Peter Bohmer, activist and faculty in Economics and Political Economy, The Evergreen State College

"The search is on for new ways to inhabit a strained earth. There are plenty of interesting leads in these pages that will get you thinking!" - Bill McKibben, author Eaarth: Making a Life on a Tough New Planet

“The constitutional proposals of Prout are the ethical summary of everything that humanity needs to accomplish universal fraternity. The importance of Prout is that its vision of a new world is not just concerned with political, social and economic relationships, but also with education, gender relationships and spirituality.” – Frei Betto, activist and author of the bestseller Fidel and Religion

"From Caracas, where the author is putting his ideas into practice, comes this accessible guide to the spiritual socialism of P.R. Sarkar. Activists working on contemporary issues from local food production to economic inequality will find much of value in this innovative volume." Jeffery M. Paige, author of Agrarian Revolution

“The very concept of After Capitalism is liberating. This book is a must for those of us who are striving for a more equitable, ethical and just world–one which views society and the environment holistically and ethically.” - Frank Emspak, Professor Emeritus, University of Wisconsin; CEO and Executive Producer of Workers Independent News

“Dada Maheshvarananda’s book enriches the paradigm of P.R. Sarkar, who proposes that human development in its highest sense should be the goal of economic development. It has the power to construct itself in a post-capitalist project.” – Marcos Arruda, author of External Debt: Brazil and the International Financial Crisis
Posted by Dada Maheshvarananda at 22:51 No comments:

Launching a new book, After Capitalism: Economic Democracy in Action

In 2003 I published After Capitalism: Prout's Vision for a New World. It was subsequently translated into nine other languages and sold a total of about 15,000 copies with no distribution or marketing. However, when I undertook to update it, both the world and the development of Prout had changed so much that I wrote 80 percent new content in the 390 pages. Economic democracy, a fundamental demand of Prout, is also starting to resonate with the indignados movement of Spain and Portugal, the global Occupy Movement and with many other progressive activists.

I am finally emerging from nearly a year of living like a hermit on this project. Next week, After Capitalism: Economic Democracy in Action will be available for sale on Amazon and Barnes and Noble. A Kindle version, an audio book and an electronic version will quickly follow; the latter two will also be for sale at Apple iTunes.

What's new in this book? There are six new essays by Prout activists and two revised ones, a conversation with Noam Chomsky, many more examples of successful cooperatives and Prout projects, a number of resource tools and practical techniques to effectively present Prout to the public, and a deeper analysis of the fundamental principles and how to apply them. The book has new sections on leadership training, Sadvipra governance, guerrilla street theater, a greatly expanded and improved section on the exploitation and liberation of women, a block-level planning exercise with detailed questions, instructions for the popular Sarkar Game, and much more. At the end are discussion questions for each chapter so the book can be used as a study guide; Appendices B and C are tools to design your own Prout Study/Action Circle.

The cover photo is provocative, showing an Occupy protest in San Francisco with a veteran holding a U.S. flag upside down, which symbolizes distress. The book is written for activists, progressives and the majority of people who want a better world. Mirra Price in Asheville will start a strong marketing campaign, sending the book to progressive magazines and newspapers, setting up radio interviews by telephone and eventually organizing a book promotion tour. I will be going to the United States to attend the Economic Democracy Conference in Madison, Wisconsin on October 11-14 and plan to tour for about a month. If you have any suggestions or contacts for this marketing campaign, please contact her at: mirraprice[at]gmail.com.

I have often said that the best part of the previous book was the acknowledgements, and it is even more true of this book. More than 70 friends, including economists, ecologists, activists, agriculturalists, and some very good writers have generously given their time to review, correct and improve the text. The book is much better because of them.

With your generous support, this book can effectively spread the empowering messages of economic democracy and Prout to many people, including some whose voices are seldom heard, connecting us to make the world a better place for the good and happiness of all.
Posted by Dada Maheshvarananda at 23:01 No comments: 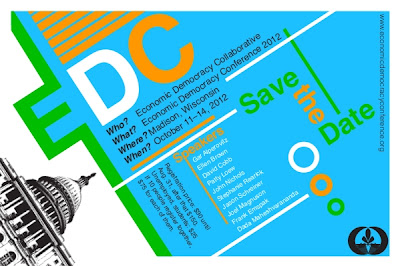 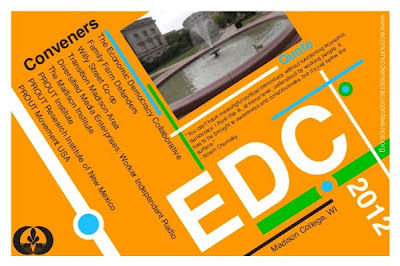 Posted by Dada Maheshvarananda at 01:14 No comments: