You are cordially invited to attend the First Global Prout Conference to be held in Venezuela. The first three days, July 7-9, 2011, will be a public conference in a Caracas auditorium: “Building a Solidarity Economy Based on Ethics and Ecology”. There will be two panel discussions each morning, and simultaneous workshops each afternoon. More than 50 progressive leaders, writers and activists will dialogue about how to practically build a local cooperative-based economy that is democratic, protective of the environment, and that offers a higher quality of life to everyone. Several hundred participants and media journalists are expected.

Sunday, July 10, will be “free day” of sightseeing and collective meditation in the Botanical Gardens which Baba visited in 1979. Then on July 11-13 will be an Intensive Prout Strategy Session in the Prout Research Institute for more than 100 active Proutists. Using “Open Space Technology”, we will focus on what impassions us about Prout and how to coordinate our efforts around the world for the greatest impact. Finally, on July 14 will be a visit to Centro Madre Master Unit, and on July 15-16 visits to very successful Venezuelan cooperatives and other social projects.

The cost for the conference, vegetarian food and simple dormitory-style accommodations in the Prout house or Ananda Marga kindergarten or jagrti will be as follows:

Children up to 11 are free, 12-17 are half price. Online registration form will be available soon at: www.priven.org
Further information about climate, what to bring, and orientation aboutVenezuela are available there, too.

We would like to invite papers to be presented at the public conference, “Building a Solidarity Economy Based on Ethics and Ecology.” We accept papers on the following subjects: Prout, solidarity economy, cooperatives, ecology and ethics, ideally with a focus on Venezuela or Latin America. At least a one-page summary of your paper or presentation must reach the above email by May 15 to be considered for inclusion.

The author of each presentation that is accepted will have just 15 minutes to present it in summary to the entire plenary in a panel, plus a little time to respond to questions. We hope to publish the proceedings after the event, in which we can include full-length articles.

We also solicit proposals to lead 90-minute interactive workshops in the afternoons on the same themes. Five or more workshops will be held simultaneously in different rooms during each time slot, so participants will voluntarily choose which workshop to attend.

Even if you cannot attend the conference, you are invited to submit articles, videos or other presentations for consideration.
Posted by Dada Maheshvarananda at 15:12 4 comments:

THE PROGRESSIVE UTILIZATION THEORY (PROUT): ALTERNATIVE ECONOMIC AND SPIRITUAL MODEL FOR THE WELFARE OF ALL

by Dada Maheshvarananda and Mariah Branch

To envision our future, it is vitally important to ask: what kind of world do we want? Prout (the Progressive Utilization Theory) is a socioeconomic alternative model that promotes the welfare and development of every person, physically, mentally, and spiritually. This article provides a brief introduction to some of the economic and social concepts of Prout, including guaranteeing minimum necessities to all, the right to jobs, a three-tiered economy, including small-scale private enterprises, cooperatives, and large-scale publicly owned key industries, food sovereignty, sustainable agriculture, proper utilization of natural and human resources, and economic democracy. Prout promotes an ecological and spiritual perspective that is universal and nondogmatic. Prout's holistic model provides an overarching framework to effectively measure and compare policies for the greater good of all people, as well as the planet.

BLAME IT ON THE PRESIDENT? 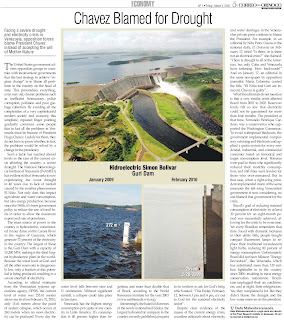 
The United States government advises opposition groups in countries with inconvenient governments that the best strategy to achieve "regime change" is to blame all problems in the country on the head of state. This personalizes everything, even very old, chronic problems such as inefficient bureaucracy, police corruption, pollution and poor garbage collection. By avoiding all the complexities of a very sophisticated modern society and economy, this simplistic, repeated finger-pointing gradually convinces some people that in fact all the problems in Venezuela must be because of President Hugo Chávez. Luckily they do not have to prove whether, in fact, all problems will be solved by a change in the presidency.

Such a tactic reaches absurd levels in the case of the current crisis currently affecting the country: a severe drought! The National Meteorological Institute of Venezuela (INAMEH) has evidenced that Venezuela is now experiencing the worst drought in 40 years due to lack of rainfall caused by the weather phenomenon El Niño. Not only does this impact agriculture and water consumption, but also energy production, because since the 1960s, government policy has been to reduce as much as possible the use of fossil fuels to allow the maximum export and sale of petroleum.

The main source of power in the country is hydroelectric, concentrated in four dams on the Caroní River in Guayana Region that generate 73 percent of the electricity of the country. The largest of these is the Gurí Dam with 10,200 MW of installed capacity, making it the third-largest hydroelectric plant in the world. Because the water level at Gurí and all the other reservoirs is dangerously low, only a fraction of this potential is being produced and the country is undergoing a severe shortfall of electricity.

According to official estimates from the Venezuelan Systems Operation Agency (OPSIS), the current level of water was 255.61 meters above sea level on February 21, 2010, only 15.61 meters above the point of system collapse at 240 meters when no more electricity can be produced. Every day the water level falls between nine and 11 centimeters. Without significant rainfall, this could take place in late June.

Venezuela has the highest energy consumption per capita of any country in Latin America. Its consumption is 40 percent higher than Argentina and more than double that of Brazil, according to the World Resources Institute for the year 2005.

Interestingly, the board of directors of the newly nationalized Edelca, the largest hydroelectric company in the the country, recently published a request to its workers to ask for God's help, which stated, “This Friday 12th of February, between 3 pm. and 4 pm., cry out to God for the national electricity sector.”

Despite the clear evidence of the causes of the energy crisis, countless editorials about electricity and water shortages in the Venezuelan private press continue to blame the President. For example, in an editorial by Nitu Pérez Osuna's editorial in the national daily El Universal on Feb. 17, titled, "Is there, or is there not an electrical crisis?", she claimed, "There is drought in all of the Americas, but only Cuba and Venezuela have rationing. How backwards!" And on January 17, an editorial in the same newspaper by opposition journalist Marta Colomina carried the title, "El Niño and Gurí are innocent, Chávez is guilty".

What the editorials do not mention is that a very similar crisis affected Brazil from 2001 to 2002. Reservoir levels fell so low that electricity could not be guaranteed for more than four months. The president at that time, Fernando Henrique Cardoso, was a conservative who supported the Washington Consensus. To avoid widespread blackouts, the government implemented compulsory rationing and blackouts and applied a quota system for every residential, industrial, and commercial consumer based on historical and target consumption level. Bonuses were paid to those who significantly reduced their monthly consumption, and stiff fines were leveled for those who over-consumed.["Implementing Power Rationing in a Sensible Way: Lessons Learned and International Best Practices", Joint UNDP / World Bank Energy Sector Management Assistance Program (ESMAP) Report 305/05, August 2005] But in that case, when a right-wing president implemented many of the same measures the left-wing Venezuelan government is now considering, no one blamed the government for the crisis.

Brazil's goal of reducing national consumption of electricity by at least 20 percent for an eight-month period was successfully achieved, allowing for the crisis to be overcome. Yet every Brazilian remembers that time. Faced with dramatic increases in their utility bills, people bought compact fluorescent lamps to replace their traditional incandescent light bulbs, reducing 80 percent of energy consumption. Unfortunately Brazil did not have Mission“Energy Revolution,” like Venezuela, that has substituted more than 120 million lightbulbs in Venezuela since 2006, resulting in mass energy conservation nationwide. Brazilians unplugged their air conditioners, and at night their refrigerators. Yes, they complained a lot. But they didn't blame the drought and the low water reserves on the president.
Posted by Dada Maheshvarananda at 01:25 No comments: