It was a magical week in Ireland. After meeting the president and visiting beautiful Sunrise Farm Master Unit, I gave a presentation about Prout in downtown Dublin to 45 participants. One wrote, "Your powerful presentation and the discussions it catalyzed were a lovely reminder of the hope, potential and compassion that exists here in Ireland."

Posted by Dada Maheshvarananda at 21:30 No comments:

Meeting with the President of Ireland 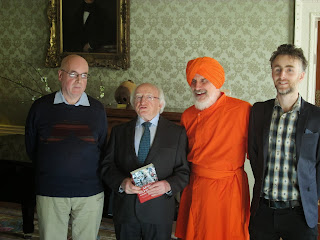 Meeting with President Michael D. Higgins of Ireland in Áras an Uachtaráin, the president's official residence, Dublin, on February 12, 2014

The military attache who showed us into the beautiful historic reception room set up with tea and coffee explained where I should stand and greet the president when he entered. When Niall asked him how long the meeting would last he said, "That completely depends on the president, but I would expect between 10-20 minutes." In fact the meeting lasted almost an hour.

The president had invited Ruairí McKiernan, a young social entrepreneur and self-described community troublemaker who had organized the Dalai Lama's visit to Ireland, to attend. After the photos were taken, the president asked the reception assistants to bring orange juice for me, and his attache to bring in his Prout books. The copy of After Capitalism that Niall had mailed him had several book markers.

He said, "I've marked up my copy a lot. I know Marcos Arruda who wrote the preface to After Capitalism. We met during the Earth Summit in 1992 in Rio de Janeiro when I was minister for the environment. We made a documentary together."

President Higgins repeated several times, "This book is remarkable. It needs wide circulation." He expressed his gratitude to "this wonderful person, Niall," who had sent it to him. He explained that he had tried to find Niall's telephone but it wasn't listed, so I joked that he wasn't as "efficient" as the NSA. Then he suddenly asked Niall, "Why haven't you made this book available to the public?" The president then suggested various publishers and trade union leaders that we should approach this week while I am here in Ireland.

The president opened his copy of the book and read to us one paragraph: "The International Monetary Fund in 2009 estimated the total value of the world’s economy to be US$70.21 trillion. And yet the total world derivatives market in the second half of 2009 has been estimated at about US$615 trillion, more than eight times the size of the entire global economy!" And now it is even more than that, he emphasized.

He felt the second Prout book that Niall had sent him, "Principles of a Balanced Economy" by Roar Bjonnes is also very good, but it's more a handbook for cooperativists.

He talked about the discourse on language, how it has been subverted by the neo-liberal agenda. He said that the media throughout Europe now talks about "the tax burden" as though it should be avoided completely, not that it is part of our social responsibility. He asked me, how to change the discourse of institutions? How to get this into the discourse?

His experiences in Nicaragua, and El Salvador, with international human rights delegations. He said he knew one woman who was killed. He later stood with the woman's grandmother at the Monument to Memory and Truth in El Salvador that has the names of 47,000 names of people who lost their lives during The Salvadoran Civil War (1979–1992). Sadly, he said, the children who were refugees always made drawings of helicopters.

He said at the World Economic Forum that takes place each year in Davos, Switzerland, all the people "have ashes in their mouths". The politicians keep going, but they keep mouthing the same thing because they haven't got any vision.

I gave President Higgins a copy of "Notes and Recommendations on the Irish Economy" by the Institute for New Economic Futures (INEF -- see www.beyondtheeurocrisis.org). I explained that seven Proutist economists in different countries had contributed to this 13-page proposal how to make the Ireland more self-reliant and resilient to global financial crises. That 400,000 Irish, mostly young people, have left the country since the 2008 crisis looking for work in other countries is a tragedy.

He feels there is a great misunderstanding in Europe about Latin America.

He talked about the different religions that depend on their holy book and about the fatalism of India. I agreed that there are dogmas in both the West and the East that are divisive, and how spirituality, on the other hand, is all-inclusive.

He was very impressed about Prabhat Ranjan Sarkar and said, "Anyone who can fast for five years on only two cups of yoghurt a day must be very strong!"

After the hour passed with this charming conversation, President Higgins graciously apologized for taking so much of my time. When we said farewell, he embraced me.

Posted by Dada Maheshvarananda at 18:26 No comments:

Radio Interview with Greg Moffitt on his Show "Legalize Freedom" 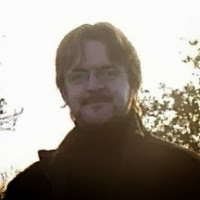 Posted by Dada Maheshvarananda at 19:58 2 comments: