Letter to Korean Readers of "After Capitalism: Economic Democracy in Action", to be published this month 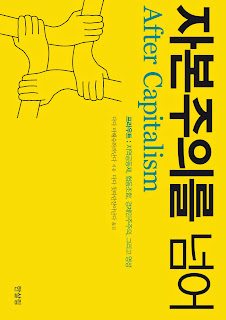 In recent history the Korean people have suffered terribly from the effects of three ideologies: fascist imperialism, communism and capitalism. Whereas the effects of the first two are obvious, the third, capitalism, is a little more insidious. You live in what many would consider to be a very successful society, the world's 12th largest economy. And yet, consumerism, selfishness and greed are clearly infecting every society including Korea. According to Forbes magazine, at the time of this writing, South Korea has 27 billionaires, each with a wealth ranging from 1 to 13 billion dollars, and 10 of the world's largest 500 corporations. Sadly, poverty and inequality continue to plague Korea. Capitalism works well for some people, but not for everyone.

Capitalism has permitted chaebol to dominate the economy while giving little power to common people. The heavy concentration of population and resources in greater Seoul weakens the rest of the country. Greed has engendered cronyism and patronage.

A recent book in English by my friend, activist and scholar George Katsiaficas (assisted by his recently deceased wife, Shin Eun-jung), "Asia's Unknown Uprisings Volume 1: South Korean Social Movements in the 20th Century" (“May Spring” will publish the book in Korean in May 2015) explores the impact protest movements fighting dictatorships have had on Korea's society. From the Tonghak uprising, independence movement and anti-Japanese resistance, to the overthrow of Syngman Rhee, resistance to Park Chung-hee and Jeon Du-hwan, as well as student, labor, and feminist movements, these have all made profound changes in the collective consciousness.

The Gwangju Uprising, from May 18 to 27, 1980, is especially significant, as an example of how first students, and then hundreds of thousands of people from all walks of life, could unite in solidarity, compassion and cooperation.

This spirit of solidarity and cooperation symbolizes the way forward for Korea. And I believe that the Progressive Utilization Theory (Prout) is a socio-economic model that can improve the quality of life for all Koreans. As a practical alternative to both communism and capitalism, I believe it has the potential to reunite the tragic political division of the Korean people.

The history of the cooperative movement in Korea has an inspiring list of accomplishments that we can learn from: the Poolmoo school's incubation of co-operatives starting in 1959, Blue Cross Medical Co-op, the Yangseo Co-op, the consumer cooperative movement (with a total membership today of half a million). The new “Framework law on cooperatives”, passed in 2011 with support from all political parties and government, is a significant step forward, allowing as few as five persons to easily form a co-op with legal protection. I am especially honored that this book is published by Hansalim, the largest grass-roots co-op in Korea with half a million members.

You have great treasures that are also great tools in this struggle: your beautiful language, culture and landscape. As I explain in this book, "our culture is our strength", for it unites people and gives them the strength to overcome the greatest obstacles. For example, your expression, "uri nara" (which means "our country"), is significant, because in Korean, unlike most other languages, the emphasis is on "our" and not "my" country. Your land, your society, belongs to everyone. And this is a fundamental idea of Prout: that the resources, the land, the water, the air belongs to everyone and we need to share it, not privatize it, for the welfare of all.

Though I do not speak Korean, I would be happy to hear your critical feedback and suggestions. Please write to me in English at maheshvarananda@prout.org.ve or in Korean via my translator and friend, Dada Cittarainjanananda at dadacitananda@gmail.com.

Posted by Dada Maheshvarananda at 16:29 No comments: