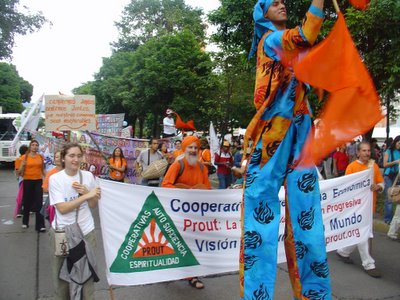 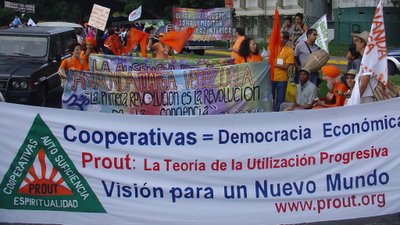 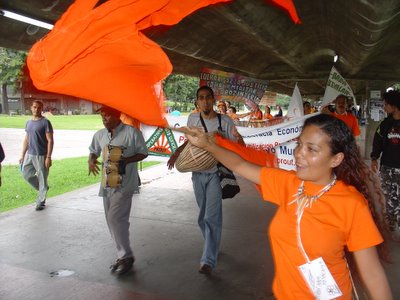 Marching for a Better World

On the first day of the Sixth World Social Forum in Caracas thousands of activists marched from the Central Venezuelan University with the theme, “Another world is possible!”

Thirty Proutists formed the most colorful and attractive group with the best music! Singing kiirtan continually, waving orange flags while they danced, they followed two wonderful clowns on stilts with orange flags. They carried four banners which said: “Cooperatives = Economic Democracy, Prout: A Vision for a New World”, “The first revolution is the revolution of consciousness,” The absence of universal spirit is the root of all problems – P.R. Sarkar,” and “Struggle for social justice and meditate for peace.” A slightly intoxicated older man did the whole march with us, playing some incredible bongo rhythms with our kiirtan for four hours.

Five thousand journalists are registered here at the WSF, and the majority were at the march, taking photos and filming. We gave dozens of interviews for both Venezuelan and international media. Events such as this one has tremendous potential for propagating the ideals of Prout and P.R. Sarkar. The more Proutists that can participate, the greater impact we can make.

Posted by Dada Maheshvarananda at 15:12 2 comments: